The Dallas Arts District was created in early 2009 with a clear vision to stimulate cultural life and a three-point mission statement to serve the community as a private nonprofit organization.  The district itself spans over 68 acres and covers 19 blocks.  It is the largest arts district in the nation and Dallas is lucky to have a region with such creative vitality, luckier still as the region continues to grow. 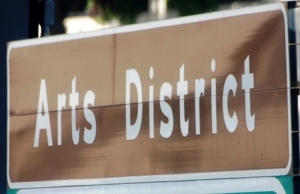 The most recent additions to the district are Klyde Warren Park and the Perot Museum of Nature and Science.  The district is like a big neighborhood.  The Klyde Warren Park is the new finely manicured front lawn and the Perot Museum is the new neighbor who just moved in down the street.  These two additions to the district will stand next to the well-established and well-known surrounding organizations, including the Dallas Museum of Art, the Nasher Sculpture Center, the Crow Collection of Asian Art, the Dallas Opera at the Margot & Bill Winspear Opera House, the AT&T Performing Arts Center, the Dallas Symphony at the Morton H. Myerson Symphony Center and many more . . . 68 acres and 19 contiguous blocks more. 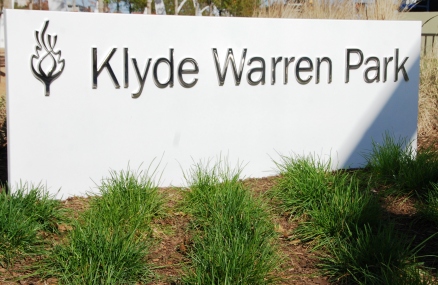 Klyde Warren Park opened on October 29th of this year and it, along with all the activities held there, is free.  You can bring your dogs and let them off the leash in the ‘My Best Friend’s Park’ area.  While the dogs play, you can use the free WiFi as you walk under the shaded walkways to one of the many food trucks to grab a bite to eat.  The park has plans for a full Thomas Phifer-designed restaurant to open in the summer of 2013, but until then the food trucks will be at the park from 11 a.m. – 4 p. m.  Sit down at a table atop the huge lawn and send the kiddos off to the children’s park while you eat and look at the park’s many water features and let the Dallas traffic flow beneath you.  After eating, there is the ‘Recreation and Games Courtyard’ if you wanted a quiet spot to read.  Or you could sit at one of the tables set up with boards for checkers, backgammon and chess.  You can practice your putting at the green on the East Lawn or go over to The Commons for a game of foosball or ping pong. 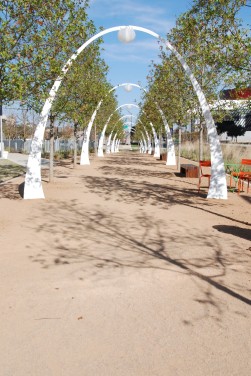 The 5.2 acre deck park was constructed over Woodall Rodgers Freeway between Pearl and St. Paul streets in downtown Dallas.  The park, built over the recessed eight-lane freeway, was designed by award-winning architect Jim Burnett.  All the landscaping, including 322 trees and 37 different species of native Texas plants, is an oasis of stillness surrounded by the bustle of downtown.  Though it is surrounded by tall glass buildings and steel-framed skyscrapers, the park is open to the Texas sky and full of vegetation.  It is a unique space in the heart of a special city.  Check the park’s calendar to make sure you don’t miss any of the daily events free to the public, ranging from concerts, films and lectures to boot camp, yoga and croquet.

Visible from the park, on the corner of  Woodall Rodgers and N. Field Street, is the Perot Museum of Nature and Science.  You can’t miss it.  Really, it’s the huge gray building with a 150 foot long glass rectangular prism running diagonally down its side.  This bold piece of modern architecture is 170 feet tall, which would usually lend room for a building with 14 floors- but the Perot has five, and is 180,000-square-feet total.  The walls are composed of over 650 textured concrete panels and the massive structure sits on a 4.7 acre site filled with indigenous Texas plants.  A full acre of the building’s roof is covered in drought-resistant grasses and rocks that celebrate the museum’s spot in the Lone Star State. 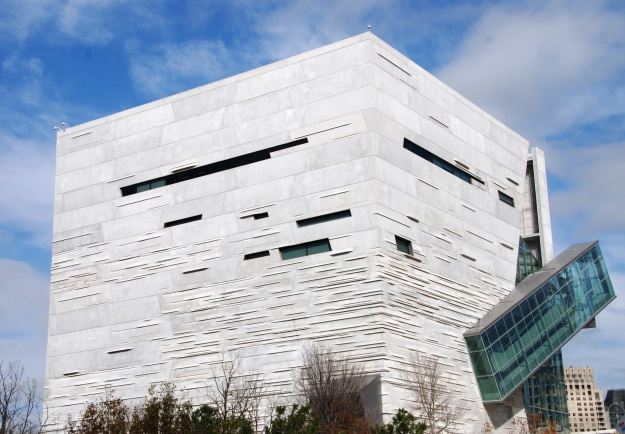 The Perot Museum of Nature and Science

The near-cube shaped building is more energy efficient than rectangular buildings and all its water demands are met by recapturing condensation from the air conditioner.   Solar-powered water heating and a rainwater collection system are just a couple of the museum’s Green features.

The building itself, designed by Thom Mayne and his firm Morphosis Architects, is a stand-out even among the other fabulous facilities in the Arts District.  It is monumental and iconic, commanding a place among the other museums in the Dallas community.

The architecture on the exterior is just a glimpse of what is to come inside.  There are eleven permanent exhibition halls spread out over the five floors.  The main lobby, museum shop and cafe are admission-free, and there you can see the Malawisaurus dinosaur, use free public WiFi and see some “dancing” water molecules.  Admission is charged for the main exhibition spaces and for special exhibits. 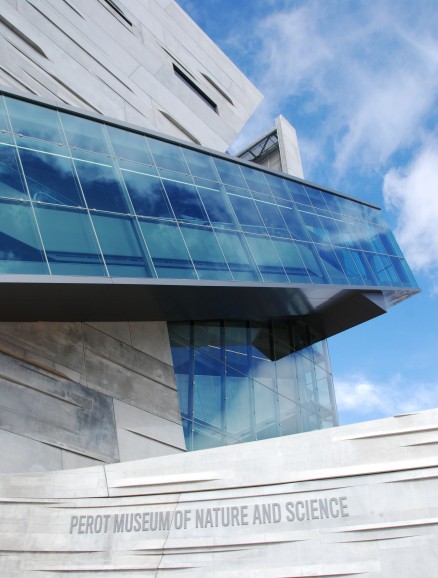 The Perot Museum of Nature and Science

The encouraged, and best, route through the museum starts with three escalator rides up to the top floor, the final of these being within the glass-enclosed structure that gives the audience a great view of downtown.  Once at the top, you can then trickle down through the museum and catch each exhibition hall along the way.

As a Museum of Nature and Science, one can safely assume the normal museum protocol of ‘hands behind your back – touch with your eyes only’ can be left in the car to be utilized another time.  The Perot is extremely hands on.  In every one of the exhibition halls visitors are able and encouraged to engage with the exhibit.

In the T. Boone Pickens Life Then and Now Hall, where fossils and dinosaur skeletons fill the 11,000-square-foot space (most of which were unearthed in Texas and Alaska), you can handle fossil replicas in a fossil lab and solve ancient mysteries.  You can build your own virtual animal to fight in a videogame or watch video interviews with the scientists who discovered the fossils within the space at the push of a button.  Walk up a short flight of stairs and you will find the Rose Hall of Birds where you can put on a pair of 3-D glasses and stand in front of a flight simulator that lets you fly through the mountains as a bird just by tilting your arms, or hear a bird’s call by pushing the button beneath each bird, even create your own virtual species of bird which you are able to name and then release into the wild. 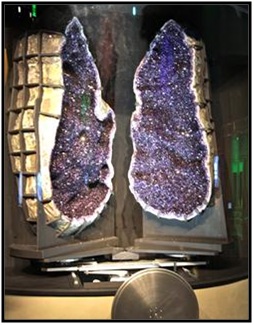 In each of the halls there is more than enough to do, you could happily spend the whole day there.  In the 2,200 square-foot Expanding Universe Hall you can take an animated 3-D tour of our solar system and use mirrors to bounce lasers at a target in the laser obstacle course.  In the Rees-Jones Foundation Dynamic Earth Hall you can make your own weather predictions and feel earthquake magnitudes in the Earthquake Shake.  In the Tom Hunt Energy Hall you can learn how a drilling rig works, see how scientists find energy reservoirs beneath the earth’s crust and learn how science plays a crucial roll in every source of energy.  The Lyda Hill Gems and Minerals Hall was one of the highlights for me.  There is a five-foot tall rock that can be opened with a wheel to display the sparkling purple crystals of the gigantic geode.  In the low-lit gallery, all types and kinds of gems stand in cases.

In the Discovering Life Hall and the Being Human Hall you can crawl into an underground root system and explore the animals living under the Piney Woodlands or stand in front of a thermal camera to see the cold and warm spots of your body. 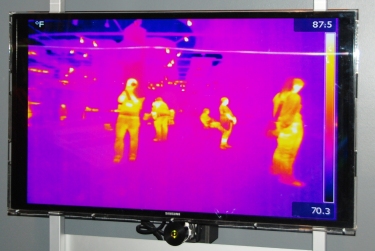 There is a great piece by artist Daniel Rozin titled “Wooden Mirror” in which wooden tiles controlled by a motor and activated by a tiny camera interpret your image.

The motors tilt each tile so they catch the right amount of light to make a wooden reflection of what the camera sees; it makes a wooden mirror.  Rozin says the piece, “…explores the line between the digital and physical world using a warm and natural material- wood- to portray the abstract notion of digital pixels.”

In the Texas Instruments Engineering and Innovation Hall you can play with chain reactions and use electronics to make music and create your own sound effects.  You can design your own robot or construct a building and test its strength against a simulated earthquake.

In the Sports Hall you can race a T-Rex or a cheetah and test your reaction speed by trying to catch a rod as it’s dropped.  You can film yourself throwing a ball and watch the replay in slow-motion or learn how food choices balanced with physical activity benefits the human body.

The Moody Family Children’s Museum was created for kiddos five and under.  This space lets toddlers and younger children explore just like the big kids.  They can use binoculars or put on a costume to become their favorite animal.  This Children’s Museum has lots of other hands-on activities available: there is Digging For Dinos, an Art Lab and a Baby and Toddler Park where children can crawl in and around a huge nest, go down into a mole hole or just sit at one of the benches and have a P.B. & J for lunch.

The museum inspires curiosity in all ages.  As I made my way down from the top floor and observed every exhibition hall, adults were just as engaged as the kids.  They were taking their time to climb the musical stairs, sitting at computers and taking part in the experiments and interactive tools the museum has to offer.  This museum brings some amazing and unique family attractions to Dallas.

The Perot Museum of Nature and Science is open year round Monday through Saturday from 10 a.m. to 5 p.m. and Sunday from noon to 5 p.m. 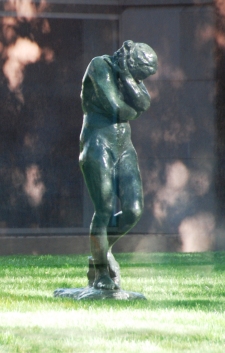 In addition to these two newest members of the Arts District, several of the other institutions have fresh offerings.  “Rediscoveries: Modes of Making in Modern Sculpture” is up and showing the masterworks from the Raymond and Patsy Nasher Collection; the DMA’s show “Posters of Paris: Toulouse-Lautrec and His Contemporaries” which examines the complex French artist poster, is up and will be at the museum until January 20th; and at the AT&T Performing Arts Center the musical Jekyll and Hyde, starring Constantine Maroulis and Deborah Cox, is running from December 4th – 16th.

There is always something going on in the Dallas Arts District and the metroplex is fortunate to have men and women intently focused on the culture that, over the years, has created a hub with a dynamic and thriving community invested in the arts; privileged still as the region continues to grow.

4 thoughts on “Growth of the Dallas Arts District”