The third annual Dallas Art Fair was in town this last weekend and was an incredible opportunity to view and buy contemporary art.   Modern and contemporary galleries from across the nation showed up with the best examples from their collections and, for a small door fee, one could wander about from one showroom to the next, seeing some of the best of contemporary art.    Some New York City and Los Angeles heavy hitters were in attendance as well as good galleries from Santa Fe, Houston and some of our best local dealers; William Campbell Fine Art, Conduit Gallery, Dunn and Brown Contemporary Art and Valley House Gallery.  Of course, if you are interested in contemporary art, you should already be a patron of all these fabulous local galleries.  But the show offered an opportunity to check in with all of them in just a few hours, within the confines of a single building.   Bonus! 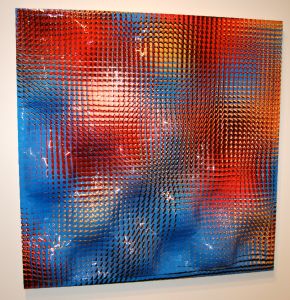 "The Red Violin" by Rusty Scruby

I spent several hours visiting all the galleries and thought I would report back on a few of the highlights.  Trends…surface has always been important in art and especially so in contemporary art.  One just cannot understand the nature of a painting without standing in its presence and seeing the artist’s controlled use of paint or ruled-off, abutted geometric elements or thickly-applied swaths of paint or layer upon layer of thin, transparent washes.  One cannot fully appreciate a Rusty Scruby three-dimensional woven photo piece without being in its presence to enjoy the undulating surfaces and the repeated images of the woven surfaces.

One of the trends which has grown over the last several years is the use of thick epoxy surfaces.   Artists are painting onto panels and then applying ¼” thick, slick surfaces of epoxy on top.  Or, as in the case of Hung Liu, a Chinese-American artist whose work uses color digital images of Chinese women and children, some are applying the epoxy in repeated thin layers and adding painted areas between the layers and above the initial ground.  In Liu’s work, this technique allows the painterly elements to float over the top of the photographic elements in several layers.  It gives the flat digital prints a three dimensionality that is quite captivating…yes, pun intended.

A trend that started years ago and is now quite mainstream is the use of computer generated imagery and digital printing.  The vast majority of art photographs are now printed digitally and in the case of many larger prints are permanently mounted behind ¼” sheets of UV plex without surrounding matting and framing.  This gives the same slick surface as the epoxy-topped paintings.   Many painters are now using

computers as an artist of yesteryear would have employed a sketchpad, to plan out their work before pulling out the paints and brushes.   Many are using combinations of digital designs and other media to create original works.  Some are using the computer as their machinery of abstraction, morphing traditional subjects into something more poetic or, as is the case with John Holt Smith, paring down a traditional landscape into its most basic elements of color by honing in on an environment so closely that the trees, rocks, flowers and sky disappear, leaving only their colors to stand for them.

A brand new photographic collection by William John Kennedy was an interesting flashback to the 1960’s New York art scene.   Back in the early 60’s Kennedy was a successful photographer doing work for advertising agencies in New York City.  He became interested in a few of the contemporary artists who were just breaking onto the scene at the time.  In 1963-64, Kennedy did a series of photo shoots of Andy Warhol and his studio (the Factory) and a series of shoots of Robert Indiana in his studio with his iconic numbers and letters paintings.  Kennedy tucked his negatives of these photo shoots away and forgot about them until just this last year.   In 2010, Colton & Farb Gallery-Houston, TX published a series of these photos that document these two iconic artists early in their careers and also sponsored the production of a documentary film that interviewed Indiana and some of the artists working at Warhol’s Factory.  These photos tell the story of these artists before they became famous.   They are shot beautifully and ought to be quite popular with photo collectors and pop art aficionados.

A few of my favorites…

Gallery Henoch—NY, NY  brought a couple of artists whose paintings are personal favorites, Steve Mills and Steve Smulka.  Steve Mills’ trompe l’oeil painting entitled “Leaning Left” depicted a bunch of folded copies of the “Wall Street Journal” standing on end and, as promised by the title, leaning left.  The snippets of articles and photos to be seen are quite biting and witty political commentary on the newspaper’s editorial bias.   Steve Smulka has been working on a series of landscapes as seen through and around glassware of various sorts.

“Spacious Skies” has four clear, stoppered decanters in the extreme foreground and a southwest desert landscape depicted beyond.   He plays with the reflections of the landscape in the glassware and this pushes and pulls the viewer’s attention back and forth from foreground to background.

I also adore Alan MacDonald’s ironic, realistic, tongue-firmly-in-the-cheek portraits of Franciscan monks and dancehall women that were offered by Stewart Gallery-Boise, ID.  These portraits of imaginary characters are depicted with their attendant symbols literally tied to belts around the waist.  In one full-length image of a monk, the subject holds an open bag of “Space Raider” chips and has a large bell and several pewter tankards lashed about his waist.  His eyes are rolled back in his head and mouth is agape, the vapid expression contributing greatly to the irony of the scene.

And of course, a long-time favorite of mine is David Bates.   Dunn & Brown Contemporary was showing “Church-Galveston” from 2007.   This employs the thickly applied paint and intense black outlining so distinctive to Bates’ work.  There were several Bates’ paintings at the show, but this was my personal favorite.

I spent many hours hopping from gallery to gallery and should have come back several days in a row.   There was too much to take in.   I did notice several ‘sold’ stickers throughout each gallery and

hope this is a sign the dealers were finding enough new buyers to keep them interested in this show.  Dallas needs this sort of event in order to build a collector base for contemporary art and kick things into high gear.   Even though we have a handful of great contemporary galleries in Dallas and Fort Worth, interest in this area of collecting has been somewhat sleepy.  I have seen many good

contemporary galleries close their doors over the years for lack of local support.    I wish all the participating dealers the best and look forward to next year’s show with much anticipation!